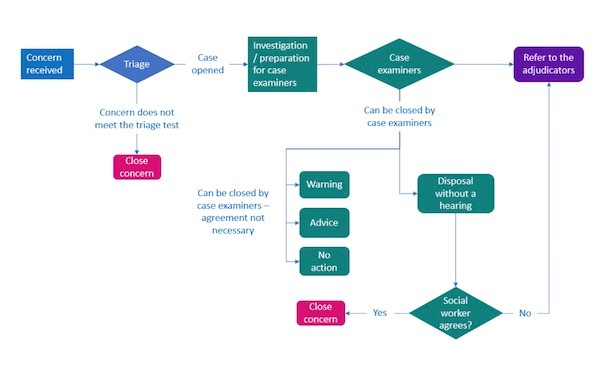 The first stage in Social Work England’s fitness to practise process is triage.  This will involve an initial screening of the complaint.  Some complaints will be filtered out at this stage.

Some very serious complaints will see immediate action or escalation; instances of registration fraud will be forwarded to a dedicated team and social workers convicted of serious ‘listed offences’ will face automatically being struck off.

For the remainder of complaints, a process based on Social Work England’s criteria will be followed to determine if there are reasonable grounds for an investigation.

The criteria referred to above include:

If after the initial triage process a decision is made that the complaint has merit, a case will be opened and passed to case examiners.

Case examiners are responsible for making decisions on the best course of action once a case has been considered at the triage and investigation stages.

These case examiners will consist of both:

The case examiners will receive a case report from the investigation team which will outline the nature of the concerns. They will take into consideration the report, any response from the social worker and any further relevant information, such as a medical report or a response from a representative acting on behalf of the social worker.

If the case examiners decide that there is a realistic prospect, they will be given the opportunity to make use of our accepted disposal powers to resolve cases without the need for a contested hearing.

The disposal powers available to case examiners are:

If the social worker subject to the fitness to practise complaint agrees to deal with the complaint by way of a disposal through the case examiner (described above), the matter will be closed.

If not, the case will be referred to a panel of adjudicators.

The adjudication panel are empowered to do a number of things:

The adjudication panel can also do a number of things in cases where a registrant has failed to either comply with the fitness to practise panel’s rules or directions:

Where a case has been referred to an interim order or fitness to practise hearing or a restoration after removal hearing, Social Work England is required to appoint a legal advisor to either chair the meeting or act as legal advisor.

It is therefore also imperative that social workers facing a fitness to practise investigations seek their own legal advice and representation at an early stage in the process.

We are a vastly experienced and successful healthcare defence barrister with a proven track record for successful outcomes for clients.

If you are a social worker facing fitness to practise issues or seeking restoration after removal hearing, contact us today for a free, no obligation case assessment.

Speak to us today

If you are facing any issues with your fitness to practise or are facing difficulties with your registration, call us today for a free initial consultation.

As the Government works to contain the spread of the coronavirus outbreak, it is implementing a number of emergency measures including the Coronavirus Bill.

Contextual factors in Fitness to Practise

The recent case of nurse Helen Lockett before the NMC’s Fitness to Practice Panel has raised important questions about the significance of “contextual factors” in fitness to practise cases.

Joint statement on fitness to practise and coronavirus

Healthcare regulator’s joint statement on the implications of healthcare workers’ decision making and concerns raised when treating patients with coronavirus.

Behaviour, attitude and fitness to practise

Evidence of a registrant’s behaviour and attitude during and after an incident and during fitness to practise proceedings is vitally important.

Police cautions – do I need to declare a caution?

Cautions must be declared to healthcare regulatory bodies such as the NMC, GMC, GDC, HCPC & GPhC. There is often uncertainty over cautions, what they are and whether they should be declared.

After multiple mistakes from my previous solicitor that left my case in an unfavourable state, I contacted Kings View Chambers who diligently supported me with the issues I had with the Health and Care Professional Council (HCPC).